that he stayed overnight in the house of Maimuna the wife of the Prophet, his aunt. He added : I lay on the bed (cushion transversally) while Allah’s Apostle and his wife lay in the length-wise direction of the cushion. Allah’s Apostle slept till the middle of the night, either a bit before or a bit after it and then woke up, rubbing the traces of sleep off his face with his hands. He then, recited the last ten verses of Sura Al-Imran, got up and went to a hanging water-skin. He then Performed the ablution from it and it was a perfect ablution, and then stood up to offer the prayer. I, too, got up and did as the Prophet had done. Then I went and stood by his side. He placed his right hand on my head and caught my right ear and twisted it. He prayed two Rakat then two Rakat and two Rakat and then two Rakat and then two Rakat and then two Rakat (separately six times), and finally one Rak’a (the Witr). Then he lay down again in the bed till the Mu’adhdhin came to him where upon the Prophet got up, offered a two light Rakat prayer and went out and led the Fajr prayer.

Another aspect to this Hadith here.

Notice the underlined part. What humor! :)
Know that the Prophet (SAW)’s doing so to Ibn ‘Abbas was out of love for him. It’s just like the punishments of love we give to our younger ones.
Lesson: you may twist your child/sibling’s ears. Should be out of love and to teach something. :) 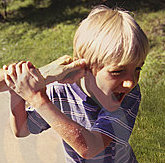