The Prophet (sallallaahu `alayhi wasallam) married Maimuna (radiallaahu `anhaa) while he was in the state of Ihram, (only the ceremonies of marriage were held).

This opinion, as discussed by scholars, was that of Ibn `Abbas (radiallaahu `anhu) only, who was most likely mistaken in this. Maimuna (radiallaahu `anhaa) herself says she did not get married in the state of Ihraam. See Abu Dawud: 1843 and Muslim: 1411.

Also, `Uthman (b. ‘Affan) reported it directly from Allah’s Apostle (may peace be upon him) that he said:

A Muhrim should neither marry (in that state) nor make the proposal of marriage.
[Sunan an-Nasa’i 2844, Sahih Muslim 1409]

However, there’s an exception. Someone who has exited the first stage of Ihraam may get married [contract only], however, intercourse will only be permissible once second stage of Ihraam has been exited completely as well. [IslamQA]

Allah’s Apostle (sallallaahu `alayhi wasallam) was cupped while he was in a state of Ihram.

The Prophet (sallallaahu `alayhi wasallam), while in the state of Ihram, was cupped at the middle of his head at Liha-Jamal.

Hijaamah (cupping) can be done in Ihraam, and obviously outside of it as well.

Ibn ‘Abbaas (may Allaah be pleased with them both) reported that the Prophet (peace and blessings of Allaah be upon him) said:

Healing is to be found in three things: drinking honey, the knife of the cupper, and cauterization of fire.

Cupping has real benefits in treating many diseases, past and present. The diseases which have been treated by cupping and for which it has been of benefit by Allaah’s Leave include the following:

In addition, cupping may offer a unique treatment which may reduce pain, and it does not have any side-effects.

More on it here.

P.S. ideal time for hijaamah is the last third of the month. And Rajab’s last 10 days are here (almost). Planning to get it done soon? :D

Abu Shuraih, Al-`Adawi said that he had said to `Amr bin Sa`id when he was sending the troops to Mecca (to fight `Abdullah bin Az-Zubair), “O Chief! Allow me to tell you what Allah’s Messenger (

) said on the day following the Conquest of Mecca. My ears heard that and my heart understood it thoroughly and I saw with my own eyes the Prophet (

) when he, after Glorifying and Praising Allah, started saying, ‘Allah, not the people, made Mecca a sanctuary, so anybody who has belief in Allah and the Last Day should neither shed blood in it, nor should he cut down its trees. If anybody tells (argues) that fighting in it is permissible on the basis that Allah’s Messenger (

) did fight in Mecca, say to him, ‘Allah allowed His Apostle and did not allow you.’ “Allah allowed me only for a few hours on that day (of the conquest) and today its sanctity is valid as it was before. So, those who are present should inform those who are absent (concerning this fact.” Abu Shuraih was asked, “What did `Amr reply?” He said, (`Amr said) ‘O Abu Shuraih! I know better than you in this respect Mecca does not give protection to a sinner, a murderer or a thief.”

) said, ‘Allah has made Mecca, a sanctuary, so it was a sanctuary before me and will continue to be a sanctuary after me. It was made legal for me (i.e. I was allowed to fight in it) for a few hours of a day. It is not allowed to uproot its shrubs or to cut its trees, or to chase (or disturb) its game, or to pick up its luqata (fallen things) except by a person who would announce that (what he has found) publicly.’ Al-`Abbas said, ‘O Allah’s Messenger (

)! Except Al-Idhkhir (a kind of grass) (for it is used) by our goldsmiths and for our graves.’ The Prophet (

) then said, ‘Except Al-Idhkhir.’ ” `Ikrima said, ‘Do you know what “chasing or disturbing” the game means? It means driving it out of the shade to occupy its place.”

On the day of the conquest of Mecca, the Prophet (

) said, “There is no more emigration (from Mecca) but Jihad and intentions, and whenever you are called for Jihad, you should go immediately. No doubt, Allah has made this place (Mecca) a sanctuary since the creation of the heavens and the earth and will remain a sanctuary till the Day of Resurrection as Allah has ordained its sanctity. Fighting was not permissible in it for anyone before me, and even for me it was allowed only for a portion of a day. So, it is a sanctuary with Allah’s sanctity till the Day of Resurrection. Its thorns should not be uprooted and its game should not be chased; and its luqata (fallen things) should not be picked up except by one who would announce that publicly, and its vegetation (grass etc.) should not be cut.” Al-`Abbas said, “O Allah’s Messenger (

)! Except Al-Idhkhir, (for it is used by their blacksmiths and for their domestic purposes).” So, the Prophet (

Allah’s Apostle (sallallaahu `alayhi wasallam) called the salamander a bad animal, but I did not hear him ordering it to be killed.”

Why are Salamanders bad?

In al-Saheehayn and elsewhere it is narrated via Sa’eed ibn al-Musayyib that Um Shareek told him that the Prophet (peace and blessings of Allaah be upon him) told her to kill salamanders. According to the report narrated by al-Bukhaari, he said: “It (the salamander) used to blow on Ibraaheem, peace be upon him.”

In Saheeh Muslim it is narrated via ‘Abd al-Razzaaq, Mu’ammar told us from al-Zuhri from ‘Aamir ibn Sa’d from his father that the Prophet (peace and blessings of Allaah be upon him) enjoined the killing of salamanders and called them mischief doers.

To Kill or not to Kill?

Killing salamanders is prescribed because there is a great deal of evidence to that effect.

Killing salamanders with one blow brings more reward than killing them with two blows. This was narrated in Saheeh Muslim via Khaalid ibn ‘Abd-Allaah from Suhayl ibn Abi Saalih from his father from Abu Hurayrah, that the Prophet (peace and blessings of Allaah be upon him) said:

Ibn Maajah (may Allaah have mercy on him) narrated in his Sunan from Saa’ibah the slave woman of al-Faakih ibn al-Mugheerah that she entered upon ‘Aa’ishah and saw a spear sitting there in her house. She said, “O Mother of the Believers, what do you do with this?” She said, “We kill these salamanders with it, because the Prophet of Allaah (peace and blessings of Allaah be upon him) told us that when Ibraaheem was thrown into the fire, there was no animal on earth but it tried to extinguish the fire, except for the salamander, which was blowing on the fire (to keep it burning). So the Messenger of Allaah (peace and blessings of Allaah be upon him) commanded that they should be killed.”

(Sunan Ibn Maajah, 3222. He said in al-Zawaa’id, the isnaad of ‘Aa’ishah’s hadeeth is saheeh, its men are thiqaat (trustworthy).) 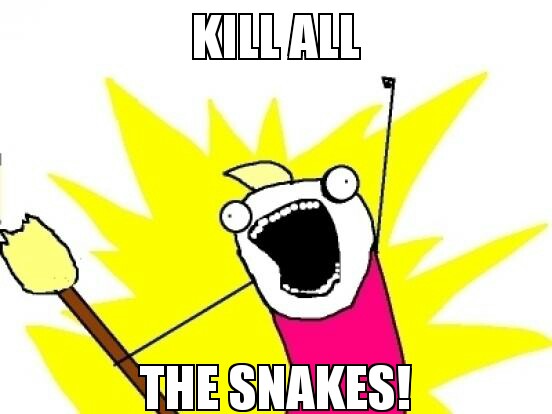 The Prophet (peace and blessings of Allaah be upon him) said:

Kill the two black ones during prayer, the snake and the scorpion.

(Narrated by the authors of Sunan and classed as saheeh by Ibn Hibbaan).

If you can kill it whilst still praying, without moving more than what is regarded as acceptable, then this is OK and the prayer is still valid.

That is not permitted. The person who grills a snake then eats it has obeyed the Shaytaan. There is something in it which is inherently devilish and something which is connected to the shaytaateen (devils); it is a like riding beast for them or something like that. Whoever mixes its flesh with his flesh [by eating it] should be avoided because of that.

From Fataawa Samaahat al-Shaykh Muhammad ibn Ibraaheem (may Allaah have mercy on him) p.1/95