Volume 4, Book 52, Number 82 :
Narrated by Abu Huraira (radiallaahu `anhu)
Allah’s Apostle (sallallaahu `alayhi wasallam) said, “Five are regarded as martyrs: They are those who die because of plague, abdominal disease, drowning or a falling building etc., and the martyrs in Allah’s Cause.”

Volume 4, Book 52, Number 83 :
Narrated by Anas bin Malik (radiallaahu `anhu)
The Prophet (sallallaahu `alayhi wasallam) said, “Plague is the cause of martyrdom of every Muslim (who dies because of it).”

Shaykh ‘Abd al-‘Azeez ibn Baaz (may Allah have mercy on him) says: 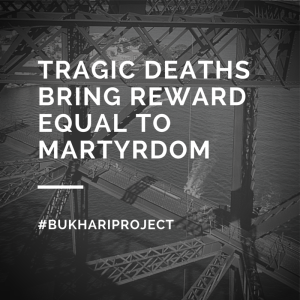