Volume 4, Book 52, Number 84 :
Narrated by Al-Bara (radiallaahu `anhu)
When the Divine Inspiration: “Those of the believers who sit (at home)” was revealed, the Prophet (sallallaahu `alayhi wasallam) sent for Zaid (bin Thabit) (radiallaahu `anhu) who came with a shoulder-blade and wrote on it. Ibn Um-Maktum (radiallaahu `anhu) complained about his blindness and on that the following revelation came: “Not equal are those believers who sit (at home) except those who are disabled (by injury, or are blind or lame etc.) and those who strive hard and fight in the Way of Allah with their wealth and lives).” (4.95)

Volume 4, Book 52, Number 85 :
Narrated by Sahl bin Sad As-Sa’idi
I saw Marwan bin Al-Hakam sitting in the Mosque. So I came forward and sat by his side. He told us that Zaid bin Thabit (radiallaahu `anhu) had told him that Allah’s Apostle (sallallaahu `alayhi wasallam) had dictated to him the Divine Verse: “Not equal are those believers who sit (at home) and those who strive hard and fight in the Cause of Allah with their wealth and lives.’ (4.95) Zaid (radiallaahu `anhu) said, “Ibn-Maktum came to the Prophet (sallallaahu `alayhi wasallam) while he was dictating to me that very Verse. On that Ibn Um Maktum (radiallaahu `anhu) said, “O Allah’s Apostle! If I had power, I would surely take part in Jihad.” He was a blind man. So Allah sent down revelation to His Apostle while his thigh was on mine and it became so heavy for me that I feared that my thigh would be broken. Then that state of the Prophet (sallallaahu `alayhi wasallam) was over after Allah revealed “…except those who are disabled (by injury or are blind or lame etc.) (4.95)

(Not equal are those of the believers who sit (at home), except those who are disabled), refers to those who did not go to the battle of Badr and those who went to Badr. When the battle of Badr was about to occur, Abu Ahmad bin Jahsh and Ibn Umm Maktum said, `We are blind, O Messenger of Allah! Do we have an excuse’ The Ayah,

(Not equal are those of the believers who sit (at home), except those who are disabled) was revealed. Allah made those who fight, above those who sit in their homes not hindered by disability.

(but Allah has preferred those who strive hard and fight, above those who sit (at home), by a huge reward. Degrees of (higher) grades from Him), above the believers who sit at home without a disability hindering them.” This is the wording recorded by At-Tirmidhi, who said, “Hasan Gharib. Allah’s statement,

(Not equal are those of the believers who sit (at home),) this is general. Soon after, the revelation came down with,

(except those who are disabled). So whoever has a disability, such as blindness, a limp, or an illness that prevents them from joining Jihad, they were not compared to the Mujahidin who strive in Allah’s cause with their selves and wealth, as those who are not disabled and did not join the Jihad were. In his Sahih, Al-Bukhari recorded that Anas said that the Messenger of Allah said,

قالوا: وهم بالمدينة يا رسول الله؟ (There are people who remained in Al-Madinah, who were with you in every march you marched and every valley you crossed.) They said, “While they are still in Al-Madinah, O Messenger of Allah” He said,

(Yes. Only their disability hindered them (from joining you).) Allah said,

(Unto each, Allah has promised good) meaning, Paradise and tremendous rewards. This Ayah indicates that Jihad is not Fard on each and every individual, but it is Fard Kifayah (which is a collective duty). Allah then said,

(but Allah has preferred those who strive hard and fight, above those who sit (at home), by a huge reward). Allah mentions what He has given them rooms in Paradise, along with His forgiveness and the descent of mercy and blessing on them, as a favor and honor from Him. So He said;

(Degrees of (higher) grades from Him, and forgiveness and mercy. And Allah is Ever Oft-Forgiving, Most Merciful.). In the Two Sahihs, it is recorded that Abu Sa`id Al-Khudri said that the Messenger of Allah said,

(There are a hundred grades in Paradise that Allah has prepared for the Mujahidin in His cause, between each two grades is the distance between heaven and Earth.) 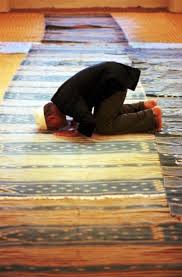 One. Blindness was not a flaw back then. We know of the blind mu’adhin: Abdullah Ibn Umm Maktum. And this Hadith tells us about a blind man who used to lead the prayer in his tribe.
Two. The most knowledgeable and wise is supposed to lead the prayer. Even if they’re blind/crippled/handicapped. Read more on it here.
Three. Something as genuine as blindness did not stop this man from going to the masjid to pray (in normal conditions). Then what do you have to say of your excuses?
Four. In extreme weather conditions, one may pray at home. More on it here.
Five. Another aspect of this Hadith discussed here.

My father said that Allah’s Apostle said, “Bilal pronounces Adhaan at night, so keep on eating and drinking (Suhur) till Ibn Umm Maktum pronounces Adhaan.” Salim added, “He was a blind man who would not pronounce the Adhaan unless he was told that the day had dawned.”

Yes, a blind man. He only needed to be told of the time. Pronouncing the Adhaan does not require sight, does it? :)

Abd-Allah ibn Umm-Maktum was among the first converts to Islam. Muhammad (SAW) sent him and Mus`ab ibn `Umair to Medina for teaching Qur’an to the inhabitants before the Hijrah took place. He and Bilal ibn Rabah were chosen as mu’adhins in Medina by Muhammad (SAW). When Muhammad (SAW) left Medina for participating in battles, he was given the responsibility of leading the prayers. (Islam surely does NOT discriminate.)

Abd-Allah ibn Umm-Maktum requested Umar, the second Caliph of Islam, to let him take part in Jihad in spite of his blindness. Umar allowed him to take part in the Battle of al-Qādisiyyah in 636 C.E. He served in the battle as the standard bearer for the Muslim side, and he was killed in the fighting.

Allah (SWT) revealed a few verses about this awesome Sahabi (companion) as well. The story goes as follows:

He (Prophet s.a.w) frowned and turned (his) back,
Because there came to him the blind man.
And what would make you know that he would purify himself,
Or become reminded so that the reminder should profit him?
As for him who considers himself free from need (of you),
To him do you address yourself.
And no blame is on you if he would not purify himself
And as to him who comes to you striving hard,
And he fears,
From him will you divert yourself?

Another verse based on an incident involving ibn Umm-Maktum is the 95th verse of An-Nisa. As related by Ibn Kathir in his exegesis of the Qur’an, Al-Bukhari recorded that Sahl bin Sa`d As-Sa`di said, “I saw Marwan bin Al-Hakam sitting in the Masjid. I came and sat by his side. He told us that Zayd bin Thabit told him that Allah’s Messenger dictated this Ayah to him, Not equal are those believers who sit (at home) and those who strive and fight in the Cause of Allah. Ibn Umm Maktum came to the Prophet as he was dictating that very Ayah to me. Ibn Umm Maktum said, `O Allah’s Messenger! By Allah, if I had power, I would surely take part in Jihad.’ He was a blind man. So Allah sent down revelation to His Messenger while his thigh was on mine and it became so heavy for me that I feared that my thigh would be broken. That ended after Allah revealed, … except those who are disabled and those who strive and fight in the cause of Allah. [Qur’an, 4:95]

So that was Abdullah Ibn Umm Maktum, the awesome Sahabi who did not let his blindness be his weakness. He did more than most ‘seeing’ men could ever do. May Allah be pleased with him. :)