Volume 4, Book 52, Number 210 :
Narrated by Salim Abu An-Nadr
The freed slave of ‘Umar bin ‘Ubaidullah (radiallaahu `anhu) who was ‘Umar’s clerk: ‘Abdullah bin Abi Aufa (radiallaahu `anhu) wrote him (i.e. ‘Umar) a letter that contained the following:– “Once Allah’s Apostle (sallallaahu `alayhi wasallam) (during a holy battle), waited till the sun had declined and then he got up among the people and said, “O people! Do not wish to face the enemy (in a battle) and ask Allah to save you (from calamities) but if you should face the enemy, then be patient and let it be known to you that Paradise is under the shades of swords.” He then said,, “O Allah! The Revealer of the (Holy) Book, the Mover of the clouds, and Defeater of Al-Ahzab (i.e. the clans of infidels), defeat them infidels and bestow victory upon us.”

Volume 4, Book 52, Number 212 :
Narrated by Anas bin Malik (radiallaahu `anhu)
Once there was a feeling of fright at Medina, so Allah’s Apostle (sallallaahu `alayhi wasallam) rode a horse belonging to Abu Talha (radiallaahu `anhu) and (on his return) he said, “We have not seen anything (fearful), but we found this horse very fast.”

Volume 4, Book 52, Number 213 :
Narrated by Anas bin Malik (radiallaahu `anhu)
Once the people got frightened, so Allah’s Apostle (sallallaahu `alayhi wasallam) rode a slow horse belonging to Abu Talha (radiallaahu `anhu), and he set out all alone, making the horse gallop. Then the people rode, making their horses gallop after him. On his return he said, “Don’t be afraid (there is nothing to be afraid of) (and I have found) this horse a very fast one.” That horse was never excelled in running hence forward. (Qastalani Vol. 5)

Volume 4, Book 52, Number 214 :
Narrated by ‘Umar bin Al-Khattab (radiallaahu `anhu)
I gave a horse to be used in Allah’s Cause, but later on I saw it being sold. I asked the Prophet (sallallaahu `alayhi wasallam) whether I could buy it. He said, “Don’t buy it and don’t take back your gift of charity.”

Volume 4, Book 52, Number 216 :
Narrated by Abu Huraira (radiallaahu `anhu)
Allah’s Apostle (sallallaahu `alayhi wasallam) said, “Were it not for the fear that it would be difficult for my followers, I would not have remained behind any Sariya, (army-unit) but I don’t have riding camels and have no other means of conveyance to carry them on, and it is hard for me that my companions should remain behind me. No doubt I wish I could fight in Allah’s Cause and be martyred and come to life again to be martyred and come to life once more.”

Volume 4, Book 52, Number 217 :
Narrated by Yala (radiallaahu `anhu)
I participated in the Ghazwa of Tabuk along with Allah’s Apostle (sallallaahu `alayhi wasallam) and I gave a young camel to be ridden in Jihad and that was, to me, one of my best deeds. Then I employed a laborer who quarrelled with another person. One of them bit the hand of the other and the latter drew his hand from the mouth of the former pulling out his front tooth. Then the former instituted a suit against the latter before the Prophet (sallallaahu `alayhi wasallam) who rejected that suit saying, “Do you expect him to put out his hand for you to snap as a male camel snaps (vegetation)?”

These narrations establish that the Prophet (sallallaahu `alayhi wasallam) did carry a flag during battles etc. But what about the color, shape and size of that flag? Did it have anything written on it?

First: The color of the banner and the flag, the Sahih and Hasan Shari’ evidences that were narrated shows that the banner is white, and the flag is black from the following evidences:

1. An-Nasa’i has narrated in his book al-Sunan al-Kubra, and at-Tirmidhi has narrated on authority of Jaber that Prophet Muhammad صلى الله عليه وسلم “entered Makkah with his white banner.”

Ibn Abi Shayba narrated in his Musannaf on authority of Amra that she said: “the banner of Prophet Muhammad sallalahu alaihi wassalam was white.”

2. Ahmad, Abu Dawud, and an-Nasa’i in his book al-Sunan al-Kubra have narrated on authority of Younus bin Obeid, the slave of Mohammad Bin al-Qassem that he said: Mohammad Bin al-Qassem sent me to al-Baraa bin Azeb to ask him about the flag of Prophet Muhammad sallalahu alaihi wassalam what is it? He said: “it was a black square from Namira”.

3. At-Tirmidhi and Ibn Majah have narrated on authority of Ibn Abbas who said: “The flag of Prophet Mohammad sallalahu alaihi wassalam was black, and his banner was white.”

Al-Baghawi has narrated in Sharh al-Sunnah on authority of Amrah who said: “the banner of Prophet Mohammad sallalahu alaihi wassalam was white, and his flag was black…”

Second: As to what was mentioned that it was yellow as in the Hadith of Abu Dawud and al-Baihaqi, there is an argument in his sanad (chain of narration).

Third: As to what was narrated that (the flag of Ali (radiyallahu anhu) at the day of Siffeen was red written on it: Mohammad Rasoolullah, and he had a black flag.) It is clear that it is not a Hadith from Prophet Mohammad صلى الله عليه وسلم, but it is an action of a Sahabi. In addition to that, the narration itself also says: “and he had a black flag”, and as it is known what is approved is the Hadith of Prophet Mohammad صلى الله عليه وسلم.

Fourth: This is in regards to the color of the flag of Prophet Mohammad صلى الله عليه وسلم and the color of his banner,i.e. the official flag for the state, and also its banner.

As to the fact that some tribes used to take a flag with a special color in their wars to distinguish themselves, this is permissible.

It was narrated in at-Tabarani in al-Kabeer on authority of Mazeeda al-Abdi’ saying: “The Prophet صلى الله عليه وسلم has knotted the flags of al-Ansar and made them yellow.”

And it was narrated from Ibn Abi Asem in al-Aahad and al-Mathani on the authority of Kurz bin Sama who said: “… And the Prophet sallalahu alaihi wassalam knotted the flag of Bani Suleim red”, so this is from the permissible (mubah). Army brigades nowadays use badges to differentiate themselves other than the official flag of the state, and it is permissible also to differentiate the armies by their names, as if numbering each army of its armies, so it is called: the first army, the third army for example, or naming it by its wilayah from the wilayat, or a province from its provinces, so it is called: Al-Sham Army or the Aleppo Army for example. 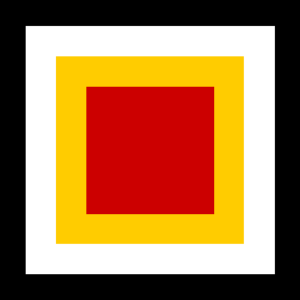 Fifth: As for the writing on it,

It was extracted by at-Tabarani in al-Awsat: (Ahmad bin Rashdine narrated that Abdul Ghaffar bin Dawud Abu Saleh al-Harrani said: Hayyan bin Obeidillah told us that Abu Mijlaz Laheq bin Humeid narrated on authority of Ibn Abbas who said: “The flag of the Messenger of Allah sallalahu alaihi wassalam was black and his banner white written on it: La Ilaha Illa Allah”. This Hadith is not narrated by Ibn Abbas except by this isnad (chain), and it is exclusive to Hayyan bin Obeidillah).

And Hayyan bin Obeidillah differed in its documentation:

A. Ibn Hibban mentioned it in al-Thiqat, and this is in his book al-Thiqat Volume 6/230:

(7491 – Hayyan bin Obeidillah Abu Zuhair the slave of Bani Odai narrating from Abu Mijlaz and his father, and Muslim bin Ibrahim and Musa bin Ismail have narrated from him)

Abu Hammam al-Salt bin Mohammad al-Kharki is from Kharek, an island in the gulf area close to Oman, and al-Bukhri had narrated for him in al-Saheeh.

Due to his mix-up in ahadith due to his old age, al-Uqeili had considered him from the weak narrators in his book, al-Dho’afa’ al-Kabir 319/1 where he said:

Al-Thahabi said about him in his book al-Mughni fi ad-Do’afaa 198/1 “Hayyan bin Obeidillah Abu Zuhair al-Basri on authority of Abu Mijlaz is not reliable.”

Are the crescent and the star Islamic symbols?

There is no basis in sharee’ah for taking the crescent or star as a symbol of the Muslims. This was not known at the time of the Prophet (peace and blessings of Allaah be upon him), or at the time of the Khulafa’ al-Raashidoon (the first four leaders of Islam after the death of the Prophet (peace and blessings of Allaah be upon him), or during the time of the Umawis (Umayyad dynasty). It emerged some time after that, and historians differ as to when this symbol was first adopted and who was the first to adopt it. Some say it was the Persians, others say it was the Greeks, and that this symbol was somehow passed to the Muslims. (See Al-Taraateeb al-Idaariyah by al-Kittaani, 1/320). It was said that the reason why the Muslims adopted the crescent was that when they conquered some western countries, the churches there had crosses on top of them, the Muslims replaced the crosses with these crescents, and the practice spread in this way. Whatever the case, symbols and banners must be in accordance with the teachings of Islam, and as there is no evidence that this symbol is prescribed by Islam, it is better not to use it. Neither the crescent nor the star are symbols of the Muslims, even though some Muslims may use them as symbols. [IslamQA]