Volume 4, Book 52, Number 220 :
Narrated by Abu Huraira (radiallaahu `anhu)
Allah’s Apostle (sallallaahu `alayhi wasallam) said, “I have been sent with the shortest expressions bearing the widest meanings, and I have been made victorious with terror (cast in the hearts of the enemy), and while I was sleeping, the keys of the treasures of the world were brought to me and put in my hand.” Abu Huraira (radiallaahu `anhu) added: Allah’s Apostle (sallallaahu `alayhi wasallam) has left the world and now you, people, are bringing out those treasures (i.e. the Prophet did not benefit by them). 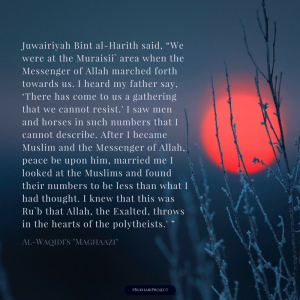 Volume 4, Book 52, Number 221 :
Narrated by Ibn ‘Abbas (radiallaahu `anhu)
Abu Sufyan said, “Heraclius sent for me when I was in ‘llya’ (i.e. Jerusalem). Then he asked for the letter of Allah’s Apostle (sallallaahu `alayhi wasallam) and when he had finished its reading there was a great hue and cry around him and the voices grew louder and we were asked to quit the place. When we were turned out, I said to my companions, ‘The cause of Ibn Abi Kabsha has become conspicuous as the King of Bani Al-Asfar is afraid of him.’ “

It’s really interesting how Imam Bukhari brings these two narrations under the same heading: “I have been made victorious by awe (by His frightening my enemies) for a distance of one month’s journey”. I say this because Ibn Hajr says in his commentary that the scholars have said that the distance between Madinah and the neighboring kingdoms/empires wasn’t more than a month’s journey. See how Heraclius gets afraid after reading Prophet’s (sallallaahu `alayhi wasallam) letter.. this was the Divine help that the above hadith mentions.