Volume 4, Book 53, Number 369 :
Narrated by ‘Abdur-Rahman bin ‘Auf (radiallaahu `anhu)
While I was standing in the row on the day (of the battle) of Badr, I looked to my right and my left and saw two young Ansari boys, and I wished I had been stronger than they. One of them called my attention saying, “O Uncle! Do you know Abu Jahl?” I said, “Yes, What do you want from him, O my nephew?” He said, “I have been informed that he abuses Allah’s Apostle (sallallaahu `alayhi wasallam). By Him in Whose Hands my life is, if I should see him, then my body will not leave his body till either of us meet his fate.” I was astonished at that talk. Then the other boy called my attention saying the same as the other had said. After a while I saw Abu Jahl walking amongst the people. I said (to the boys), “Look! This is the man you asked me about.” So, both of them attacked him with their swords and struck him to death and returned to Allah’s Apostle (sallallaahu `alayhi wasallam) to inform him of that. Allah’s Apostle (sallallaahu `alayhi wasallam) asked, “Which of you has killed him?” Each of them said, “I have killed him.” Allah’s Apostle (sallallaahu `alayhi wasallam) asked, “Have you cleaned your swords?” They said, “No.” He then looked at their swords and said, “No doubt, you both have killed him and the spoils of the deceased will be given to Muadh bin Amr bin Al-Jamuh.” The two boys were Muadh bin ‘Afra and Muadh bin Amr bin Al-Jamuh (radiallaahu `anhumaa). 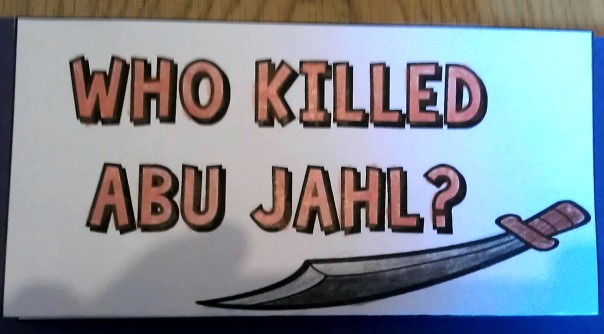 Why did the Prophet give spoils to only one of the boys when he said, “no doubt, you both have killed him”? Commentators say that the one who got the spoils was the actual killer as his sword proved it (more blood) while the other was appreciated for his efforts and help.