Volume 4, Book 53, Number 361 :
Narrated by Zahdam
Once we were in the house of Abu Musa (radiallaahu `anhu) who presented a meal containing cooked chicken. A man from the tribe of Bani Taim Allah with red complexion as if he were from the Byzantine war prisoners, was present. Abu Musa (radiallaahu `anhu) invited him to share the meal but he (apologised) saying. “I saw chickens eating dirty things and so I have had a strong aversion to eating them, and have taken an oath that I will not eat chickens.” Abu Musa (radiallaahu `anhu) said, “Come along, I will tell you about this matter (i.e. how to cancel one’s oat ). I went to the Prophet (sallallaahu `alayhi wasallam) in the company of a group of Al-Ashariyin, asked him to provide us with means of conveyance. He said, ‘By Allah, I will not provide you with any means of conveyance and I have nothing to make you ride on.’ Then some camels as booty were brought to Allah’s Apostle (sallallaahu `alayhi wasallam) and he asked for us saying. ‘Where are the group of Al-Ash’ariyun?’ Then he ordered that we should be given five camels with white humps. When we set out we said, ‘What have we done? We will never be blessed (with what we have been given).’ So, we returned to the Prophet (sallallaahu `alayhi wasallam) and said, ‘We asked you to provide us with means of conveyance, but you took an oath that you would not provide us with any means of conveyance. Did you forget (your oath when you gave us the camels)? He replied. ‘I have not provided you with means of conveyance, but Allah has provided you with it, and by Allah, Allah willing, if ever I take an oath to do something, and later on I find that it is more beneficial to do something different, I will do the thing which is better, and give expiation for my oath.”

Read this hadith in Arabic here.

We’ve had a couple of posts based on oaths and vows before, discussing their types and rulings etc. But I wanted to do this hadith in a separate post since I, personally, can relate to this very well. About 5 years ago, I also decided not to eat chicken because of their unnatural feed and lifestyle in general. I don’t remember exactly how long I stayed away from eating it, but it was definitely more than 6-7 months. My friends had to include non-chicken dishes in their menu if I was on the guest list. Yup, it was that bad! Anyhow, when I broke my ‘vow’, I simply just ate chicken.. I did not offer any expiation for it because there was no need. When you take an oath to not do something and find out later that doing something else is more beneficial, you simply choose to do the latter, according to the above statement of the Prophet (sallallaahu `alayhi wasallam).

So what was my ‘more beneficial something’? Go to town on KFC? (Ew!) Actually, it’s more to do with supporting local and organic chicken. Seriously, if you were to see the size of chickens available in the market (at least in Canada!) today, you would not be able to differentiate it from a turkey! La hawla wala quwwata illaa billah! I mean, what DO they feed them?! 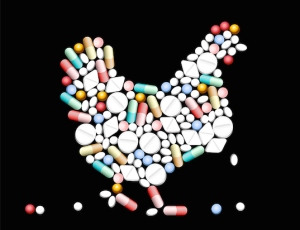 What’s your take on this?

Volume 3, Book 47, Number 803 :
Narrated by Abu Huraira (radiallaahu `anhu)
Allah’s Apostle (sallallaahu `alayhi wasallam) said, “The Prophet Abraham migrated with Sarah. The people (of the town where they migrated) gave her Ajar (i.e. Hajar). Sarah returned and said to Abraham, “Do you know that Allah has humiliated that pagan and he has given a slave-girl for my service?”

This is from the story of Sarah (Ibraheem’s wife) and the king of Egypt when he tried to have his way with her. The point of this narration in the Book of Gifts is that it shows that slaves can be gifted to others.. and to that one can accept gifts from non-Muslims too, provided they’re not unlawful in themselves e.g. alcohol.

Read more on it here.

But if the thing is something which it is haraam to use in any way and under any circumstances, then it is not permissible to deal in it or to give it as a gift, such as pigs, lions and wolves. There is nothing in the hadeeth to indicate that it is permissible to sell the things mentioned, so it is not correct to draw an analogy between selling cigarettes, tobacco, and men’s and women’s bathing suits, and selling things that may be used in some ways but not others or in some situations and not others, because it is haraam to use these things in all cases.

Volume 3, Book 47, Number 784:
Narrated ‘Ali (radiallaahu `anhu):
The Prophet (sallallaahu `alayhi wasallam) gave me a silken dress as a gift and I wore it. When I saw the signs of anger on his face, I cut it into pieces and distributed it among my wives.”

Other benefits from these narrations:

The Egyptian Mastigure (Hadith No. 2247)

This “mastigar” mentioned in the hadith is a type of sand lizard, commonly known as an Egyptian Mastigure (dabb in Arabic). You can eat it if you like. :) 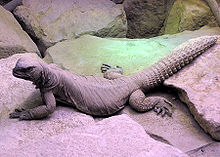 Volume 3, Book 47, Number 744:
Narrated ‘Abdullah bin Abu Qatada Al-Aslami:
That his father said, “One day I was sitting with some of the Prophet’s (sallallaahu `alayhi wasallam) companions on the way to Mecca. Allah’s Apostle (sallallaahu `alayhi wasallam) was ahead of us. All of my companions were in the state of Ihram while I was a non-Muhrim. They saw an onager while I was busy repairing my shoes, so they did not tell me about it but they wished I had seen it. By chance I looked up and saw it. So, I turned to the horse, saddled it and rode on it, forgetting to take the spear and the whip. I asked them if they could hand over to me the whip and the spear but they said, ‘No, by Allah, we shall not help you in that in any way.’ I became angry and got down from the horse, picked up both the things and rode the horse again. I attacked the onager and slaughtered it, and brought it (after it had been dead). They took it (cooked some of it) and started eating it, but they doubted whether it was allowed for them to eat it or not, as they were in the state of Ihram. So, we proceeded and I hid with me one of its fore-legs. When we met Allah’s Apostle (sallallaahu `alayhi wasallam) and asked him about the case, he asked, ‘Do you have a portion of it with you?’ I replied in the affirmative and gave him that fleshy fore-leg which he ate completely while he was in the state of Ihram.

Basically all animals are Halal except those that are made unlawful in Shari’a.
Allah says (interpretation of meaning): {Say (O Muhammad SAW): “I find not in that which has been inspired to me anything forbidden to be eaten by one who wishes to eat it, unless it be Maytah (a dead animal) or blood poured forth (by slaughtering or the like), or the flesh of swine (pork, etc.) for that surely is impure, …} [6: 145].

The Hadith establishes a rule concerning the birds and animals that are Haram, the Hadith reads: “Eating of all fanged beasts of prey, and all the birds having talons is forbidden”. [Reported by Imam Muslim ].

Therefore, eating a rabbit is permissible, and it is proved in Sahihain that “the Prophet (Sallallahu Alaihi wa Sallam) and his companions ate its meat” .
Rabbit is Halal and no one from Muslim scholars opposed this ruling.