A believer who indulges in a major sin cannot possibly have the fear/consciousness of Allah while he’s committing the sin. Iman increases and decreases, and sometimes it just goes too low.

Only sincere repentance can wipe out these sins from our slate, nothing else.

Al-Tirmidhi narrated that Anas ibn Malik (may Allah be pleased with him) said: I heard the Messenger of Allah (peace and blessings of Allah be upon him) say: “Allah, may He be blessed and exalted, said: ‘O son of Adam, so long as you call upon Me and ask of Me, I shall forgive you for what you have done, and I shall not mind. O son of Adam, were your sins to reach the clouds of the sky and were you then to ask forgiveness of Me, I would forgive you and I would not mind.’” [Saheeh al-Tirmidhi]

So just like a snake returns to its hole when in danger, similarly Islam will return to Madinah in its true form when it’ll be in danger (due to trials, doubts etc.), since Madinah was where it came out (emerged) from.

Whoever then wishes to save their Imaan can go to Madinah, for Imaan only grows while living there; so does the love for Prophet (sallallaahu `alayhi wasallam). <3

The Prophet (p.b.u.h) said, “When a faithful believer is made to sit in his grave, then (the angels) come to him and he testifies that none has the right to be worshipped but Allah and Muhammad is Allah’s Apostle. And that corresponds to Allah’s statement: Allah will keep firm those who believe with the word that stands firm . . . (14.27).

Same as above and added, “Allah will keep firm those who believe . . . (14.27) was revealed concerning the punishment of the grave.”

Here’s the background of this ayah. Must read to get the whole picture. Click here.

Who knows how much time we’re going to spend in our graves? Tens, hundreds, thousands, millions of years? It’d be nice if we enjoy that time, no? May Allah protect us from the punishment of the grave.

that he remembered Allah’s Apostle and he also remembered a mouthful of water which he had thrown on his face, after taking it from a well that was in their house. Mahmud said that he had heard Itban bin Malik, who was present with Allah’s Apostle in the battle of Badr saying, “I used to lead my people at Bani Salim in the prayer and there was a valley between me and those people. Whenever it rained it used to be difficult for me to cross it to go to their mosque. So I went to Allah’s Apostle and said, ‘I have weak eye-sight and the valley between me and my people flows during the rainy season and it becomes difficult for me to cross it; I wish you would come to my house and pray at a place so that I could take that place as a praying place.’ Allah’s Apostle said, ‘I will do so.’ So Allah’s Apostle and Abu Bakr came to my house in the (next) morning after the sun had risen high. Allah’s Apostle asked my permission to let him in and I admitted him. He did not sit before saying, ‘Where do you want us to offer the prayer in your house?’ I pointed to the place where I wanted him to pray. So Allah’s Apostle stood up for the prayer and started the prayer with Takbir and we aligned in rows behind him; and he offered two Rakat, and finished them with Taslim, and we also performed Taslim with him. I detained him for a meal called “Khazir” which I had prepared for him.–(“Khazir” is a special type of dish prepared from barley flour and meat soup)–

When the neighbors got the news that Allah’s Apostle was in my house, they poured it till there were a great number of men in the house. One of them said, ‘What is wrong with Malik, for I do not see him?’ One of them replied, ‘He is a hypocrite and does not love Allah and His Apostle.’ On that Allah’s Apostle said, ‘Don’t say this. Haven’t you seen that he said, ‘None has the right to be worshipped but Allah for Allah’s sake only.’ The man replied, ‘Allah and His Apostle know better; but by Allah, we never saw him but helping and talking with the hypocrites.’ Allah’s Apostle replied, ‘No doubt, whoever says “None has the right to be worshipped but Allah”, and by that he wants the pleasure of Allah, then Allah will save him from Hell.” Mahmud added, “I told the above narration to some people, one of whom was Abu Aiyub, the companion of Allah’s Apostle in the battle in which he (Abu Aiyub) died and Yazid bin Mu’awiya was their leader in Roman Territory. Abu Aiyub denounced the narration and said, ‘I doubt that Allah’s Apostle ever said what you have said.’ I felt that too much, and I vowed to Allah that if I remained alive in that holy battle, I would (go to Medina and) ask Itban bin Malik if he was still living in the mosque of his people. So when he returned, I assumed Ihram for Hajj or ‘Umra and then I proceeded on till I reached Medina. I went to Bani Salim and Itban bin Malik, who was by then an old blind man, was leading his people in the prayer. When he finished the prayer, I greeted him and introduced myself to him and then asked him about that narration. He told that narration again in the same manner as he had narrated it the first time.” 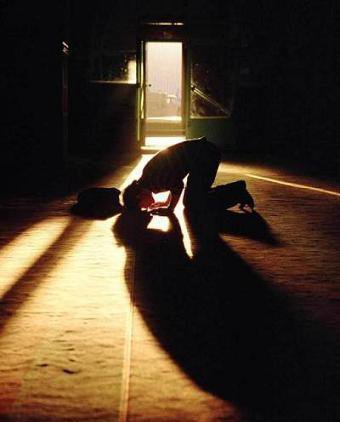 Allah’s Apostle said, “Offer some of your prayers in your houses and do not make them graves.”

Excellence of the Ansaar (Hadith No. 747)

Once the Prophet ascended the pulpit and it was the last gathering in which he took part. He was covering his shoulder with a big cloak and binding his head with an oily bandage. He glorified and praised Allah and said, “O people! Come to me.” So the people came and gathered around him and he then said, “Amma ba’du.” “From now onward the Ansar will decrease and other people will increase. So anybody who becomes a ruler of the followers of Muhammad and has the power to harm or benefit people then he should accept the good from the benevolent amongst them (Ansar) and overlook the faults of their wrong-doers.”

Ansar (Arabic: الأنصار‎ al-Anṣār) is an Islamic term that literally means “helpers” and denotes the Medinan citizens that helped Muhammad and the Muhajirun on the arrival to the city after the migration to Medina. They belonged to two main tribes, the Banu Khazraj and the Banu Aws. [Wikipedia]

We all know who the Ansaar were. We read about the in the Seerah of the Prophet (SAW) – how they helped the Muslims who migrated from Makkah, how they shared their wealth, property, houses, and even families with them, how they sacrificed for Islam. This is just one example.

Their efforts and sacrifices in the name of Islam raised their status to such heights that Prophet (SAW) said what he said in the above mentioned Hadith, that the ruler should accept the good from the benevolent amongst them (Ansar) and overlook the faults of their wrong-doers. Not just that. It’s a sign of IMAAN to have love for the Ansaar. Can you believe it? :O

Prophet (sallallaahu alaihi wa sallam) said, The sign of Eemaan is love for the Ansaar and the sign of hypocrisy is hatred for the Ansaar.
Reported by al-Bukhaaree (Eng. trans. 1/21/no.16). Refer also to Fadaailus-Sahaabah of Imaam Ahmad (2/790).

Even now, Madinah and its people are so amazing. You can’t help but love them. :P