If I saw deers grazing in Medina, I would not chase them, for Allah’s Apostle (sallallaahu `alayhi wasallam) said, “(Medina) is a sanctuary between its two mountains.”

I heard Allah’s Apostle (sallallaahu `alayhi wasallam) saying, “The people will leave Medina in spite of the best state it will have, and none except the wild birds and the beasts of prey will live in it, and the last persons who will die will be two shepherds from the tribe of Muzaina, who will be driving their sheep towards Medina, but will find nobody in it, and when they reach the valley of Thaniyat-al-Wada’, they will fall down on their faces dead.”

Yet to be seen.. though it seems highly unlikely. And what an awful sight it would be to see Madinah empty! I wonder what would prompt people to leave this sanctuary.. the beloved city of the Prophet (sallallaahu `alayhi wasallam), for which he invoked barakah in its mudd and sa’ (measuring units); the place where nothing but peace and serenity is to be found.. I wonder why its residents would prefer any other piece of land over it.

I hope I don’t live to see this time for it will be extremely saddening to hear such news. May Allah keep our hearts firm on Deen. :(

Narrated Abu Said Al-Khudri (radiallaahu `anhu): The Prophet (sallallaahu `alayhi wasallam) said “The people will continue performing the Hajj and ‘Umra to the Ka’ba even after the appearance of Gog and Magog.”

Narrated Shu’ba extra: The Hour (Day of Judgment) will not be established till the Hajj (to the Ka’ba) is abandoned.

Yes, there will come a time when no righteous people will remain on Earth (they’ll die due tot he wind that Allah will send after Gog and Magog’s wipe-out). Therefore no Hajj, and Qiyamah will be brought upon the evil ones. May Allah save us from seeing that time!

This is the kind of Hadith that makes you cry and smile at the same time. I absolutely love it. [I just saw the hearts and stars that I drew around it in my physical Bukhari back when I was studying it in a course. Such love!]

The people said, “O Allah’s Apostle! Shall we see our Lord on the Day of Resurrection?” He replied, “Do you have any doubt in seeing the full moon on a clear (not cloudy) night?” They replied, “No, O Allah’s Apostle!” He said, “Do you have any doubt in seeing the sun when there are no clouds?” They replied in the negative. He said, “You will see Allah (your Lord) in the same way. On the Day of Resurrection, people will be gathered and He will order the people to follow what they used to worship. So some of them will follow the sun, some will follow the moon, and some will follow other deities; and only this nation (Muslims) will be left with its hypocrites. Allah will come to them and say, ‘I am Your Lord.’ They will say, ‘We shall stay in this place till our Lord comes to us and when our Lord will come, we will recognize Him. Then Allah will come to them again and say, ‘I am your Lord.’ They will say, ‘You are our Lord.’ Allah will call them, and As-Sirat (a bridge) will be laid across Hell and I (Muhammad) shall be the first amongst the Apostles to cross it with my followers. Nobody except the Apostles will then be able to speak and they will be saying then, ‘O Allah! Save us. O Allah! Save us.‘

I’m speechless here. Word-less, actually. Shall one wonder about the beauty of the moment when Allah will show Himself; or seek His protection against the horror of the Day of Judgement; or crave for the immense Mercy of Allah (SWT) that He blesses His slaves with; or ask of His Bounty and Pleasure in this life and the hereafter?
All of the above, I guess? (Duh!)

But I want to know your feelings here. What’s going on in your head/heart?
I get around 200 reads on my posts per day. Come on, COMMENT!

The Prophet said, “Allah will give shade to seven on the Day when there will be no shade but His. (These seven persons are) a just ruler, a youth who has been brought up in the worship of Allah (i.e. worships Allah sincerely from childhood), a man whose heart is attached to the mosques (i.e. to pray the compulsory prayers in the mosque in congregation), two persons who love each other only for Allah’s sake and they meet and part in Allah’s cause only, a man who refuses the call of a charming woman of noble birth for illicit intercourse with her and says: I am afraid of Allah, a man who gives charitable gifts so secretly that his left hand does not know what his right hand has given (i.e. nobody knows how much he has given in charity), and a person who remembers Allah in seclusion and his eyes are then flooded with tears.”

I can’t help but say, I love this Hadith. Whenever I read it, I try to find the category that I fit in. You have to find one, wait, more than one categories for yourself as well! After all, we’ll desperately need a shade on the day when there will be no shade but His. :(

A just ruler: it doesn’t have to be a king or a president only. Everyone in their own circle is a ruler according to another Hadith of the Prophet (SAW). You’re a ruler/leader if you’re a mother/father/brother/sister/head of an organization/Imam of a masjid/pet owner/friend etc. Each one of us is a leader/ruler and we all have responsibilities. It’s up to us if we do justice to those under us or not. Do we fit in this category or not?

A youth who has been brought up in the worship of Allah: YOU! You’re young. You have energy, time, skills, health and the good life. You can be under His shade on the Day of Judgement. All you have to do is worship Allah sincerely. NOW! Not later, when you get older and weaker. Now is the time. The time you have is precious. Spend it in Allah’s worship. Obey Him. Please Him. Love Him. He’ll value it. He’ll reward you for it. And no one can give you a better return than His.

A man whose heart is attached to the mosques: a man who loves going to the masjid to pray. He does not find it hard to leave all his important work for Allah’s sake. He spends time in the masjid. He prays Salah, he recites Qur’an, he remembers Allah (dhikr), he socializes with fellow Muslims, he seeks knowledge and he indulges in other religious activities. He loves it all. His heart is attached to the mosques/masajid (places where people bow down/make sujood to Allah).

Two persons who love each other only for Allah’s sake and they meet and part in Allah’s cause only:  this one initially seemed the easiest to me, but actually it’s quite hard. Despite all our efforts, I don’t remember a gathering where I met people only for Allah’s sake and His cause, and where nothing went wrong. Where we didn’t backbite/cheat/lie/ignore a Sunnah/waste time in laghw. It’s easy to meet people for Allah’s sake. But to make sure all you do is please Allah in that meeting and part with His cause as well, it’s really hard. (Any tips for me?)
May Allah forgive our shortcomings and accept all our efforts and meetings for His sake.

A man who refuses the call of a charming woman of noble birth for illicit intercourse with her and says: I am afraid of Allah: what a man that’d be! Remember Yusuf (AS)? Yeah, he had the taqwa. And with Allah’s help, he rejected the beautiful wife of ‘Aziz. Reference: Surah Yusuf.
Anyhow, it’s quite easy to indulge in haraam these days. Equally for men and for women. It always starts with a small step. All women don’t come on strong like Aziz’s wife. Neither do men. So beware of that first glance.

A man who gives charitable gifts so secretly that his left hand does not know what his right hand has given: secret charity, only for Allah’s sake. Not to show off or anything. And the level of secrecy is clear enough by the phrase used in the Hadith.

A person who remembers Allah in seclusion and his eyes are then flooded with tears: he whispers to Allah in seclusion. He prays for forgiveness. He repents over his mistakes and sins. He begs for His Mercy. He hopes for Paradise. His heart fills with Allah’s love. His eyes flood with tears on remembering Him.
Do you do it often? If not, you should. It’s only the best feeling in the world. 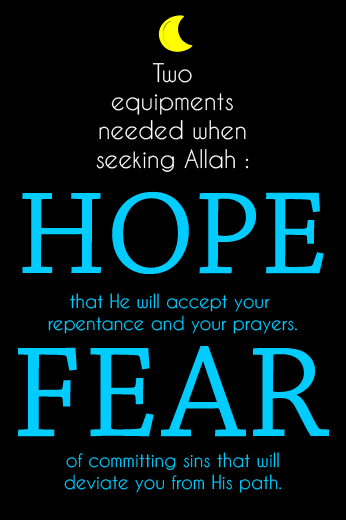 I hope you found more than one categories that you fit in. If not, make it a target, rather a mission, to be listed among these lucky seven. The struggle will be worth it, inshaAllah. :)