Allah Hates the Quarrelsome (Hadith No. 2134)

Volume 3, Book 43, Number 637:
Narrated ‘Aisha (radiallaahu `anhaa):
The Prophet (sallallaahu `alayhi wasallam) said, “The most hated person in the sight of Allah is the most quarrelsome person.”

Be nice. Don’t argue. Even if you’re right. Be the bigger person. Allah will love you. ^_^ 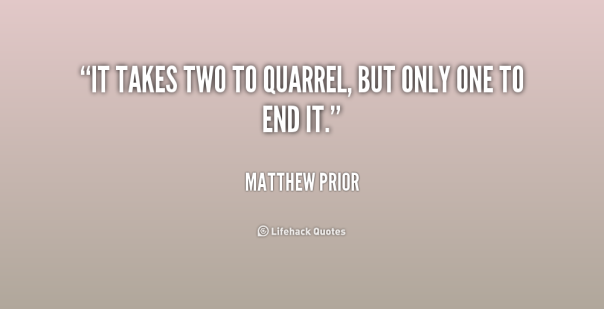 Oh, and Eid mubarak! :)
TaqabbalAllahu minnaa wa minkum (may Allah accept from us and from you).

Allah’s Apostle (sallallaahu `alayhi wasallam) said, “Allah said, ‘All the deeds of Adam’s sons (people) are for them, except fasting which is for Me, and I will give the reward for it.’ Fasting is a shield or protection from the fire and from committing sins. If one of you is fasting, he should avoid sexual relation with his wife and quarreling, and if somebody should fight or quarrel with him, he should say, ‘I am fasting.’ By Him in Whose Hands my soul is’ The unpleasant smell coming out from the mouth of a fasting person is better in the sight of Allah than the smell of musk. There are two pleasures for the fasting person, one at the time of breaking his fast, and the other at the time when he will meet his Lord; then he will be pleased because of his fasting.”

How many virtues of fasting/Ramadan have you come across up till now? There are 13 in this post and several others. Can you share some rare ones?