Chapter: The Statement of Allah Taa’la: “(This is) a mention of the mercy of your Lord to His slave Zakariya (Zechariah)”

Volume 4, Book 55, Number 640 :
Narrated by Malik bin Sasaa  (radiallaahu `anhu)
That the Prophet (sallallaahu `alayhi wasallam) talked to them about the night of his Ascension to the Heavens. He said, “(Then Gabriel took me) and ascended up till he reached the second heaven where he asked for the gate to be opened, but it was asked, ‘Who is it?’ Gabriel replied, ‘I am Gabriel.’ It was asked, ‘Who is accompanying you?’ He replied, ‘Muhammad.’ It was asked, ‘Has he been called?’ He said, ‘Yes.’ When we reached over the second heaven, I saw Yahya (i.e. John) and Jesus who were cousins. Gabriel said, ‘These are John (Yahya) and Jesus, so greet them.’ I greeted them and they returned the greeting saying, ‘Welcome, O Pious Brother and Pious Prophet!’ “

The hadith mentions Prophet Yahya who was the son of Prophet Zakariya.

The Story of Prophets Zakariya [Zechariah] and Yahya [John]

The years had taken their toll on the Prophet Zakariyah (pbuh). He was now old and bent with age, in his nineties. Despite his feebleness, he went to the temple daily to deliver his sermons.

Zakariyah was not a rich man, but he was always ready to help those in need. His one disappointment in life was that he had no children, for his wife was barren. This worried him, for he feared there was no one after him to carry out his work. The people needed a strong leader, for it they were left on their own, they would move away from Allah’s teachings and change the Holy Laws to suit themselves.

During one of his visits to the temple, he went to check on Mary, who was living in a secluded room of the temple. He was surprised to find fresh out of season fruit in her room. Besides him, no one had entry to her room. When he inquired, she told him that the fruit was from Allah. She found it every morning. But why was he so surprised, she asked him. Did he not know that Allah provides without measure for whom He wills?

This noble girl had opened this eyes to a startling idea. Could he not ask his Lord to bless him with a child in his old age? Even if his wife was past childbearing age, nothing was impossible for his Gracious Lord!

Allah the Almighty revealed: ‘Kaf, Ha, Ya, Ain, Sad, (These letters are one of the miracles of the Quran, and none but Allah Alone knows their meanings). This is a mention of the Mercy of your Lord to His slave Zakariyah. When he called out his Lord (Allah) – a call in secret, saying: “My Lord! Indeed my bones have grown feeble, and gray hair has spread on my head, and I have never been unblest in my invocation to You, O my Lord! And Verily! I fear my relatives after me, since my wife is barren. So give me from Yourself an heir, – who shall inherit me, and inherit also the posterity of Jacob (inheritance of the religious knowledge and Prophethood, not the wealth, etc.) And make him, my Lord, one with whom You are Well-pleased!”

Allah said: “O Zakariyah! Verily, We give you the glad tidings of a son. His name will be Yahya (John). We have given that name to none before him.”

He said: “My Lord! How can I have a son, when my wife is barren, and I have reached the extreme old age.”

He said: “So (it will be). Your Lord says, It is easy for Me. Certainly I have created you before, when you had been nothing.”

Zakariyah said: “My Lord! Appoint for me a sign.”

He said: “Your sign is that you shall not speak unto mankind for three nights, though having no bodily defect.”

Then he came out to his people from Al Mihrab (a praying place or a private room, etc.), he told them by signs to glorify Allah’s Praises in the morning and in the afternoon.

It was said to his son: “O John! Hold fast to the Scripture (The Torah).” And We gave him wisdom while yet a child, and made him sympathetic to men as a mercy or a grant from Us, and pure from sins (John) and he was righteous, and dutiful towards his parents, and he was neither an arrogant nor disobedient (to Allah or to his parents). And Salamun (peace) on him the day he was born, the day he dies, and the day he will be raised up to life again! (Ch 19:1-15 Quran)

Almighty Allah also said: At that time Zakariyah invoked his Lord, saying: “O my Lord! Grant me from You, a good offspring. You are indeed the All-Hearer of invocation.”

Then the angels called him, while he was standing in prayer in Al- Mihrab ( a praying place or a private room), saying: “Allah gives you glad tidings of John confirming (believing in) the Word from Allah (“Be!” – and he was! (i.e. the creation of Isa (Jesus), son of Mariam (Mary), noble keeping away from sexual relations with women, a Prophet, from among the righteous.”

Allah said: “Thus Allah does what He wills.” He said: “O my Lord! Make a sign for me.” Allah said: “Your sign is that you shall not speak to mankind for three days except with signals. And remember your Lord much (by praising Him again and again), and glorify Him in the afternoon and in the morning.” (Ch 3:38-41 Quran).

John (pbuh) was born a stranger to the world of children who used to amuse themselves, as he was serious all the time. Most children took delight in torturing animals whereas, he was merciful to them. He fed the animals from his food until there was nothing left for him, and he just ate fruit or leaves of trees. 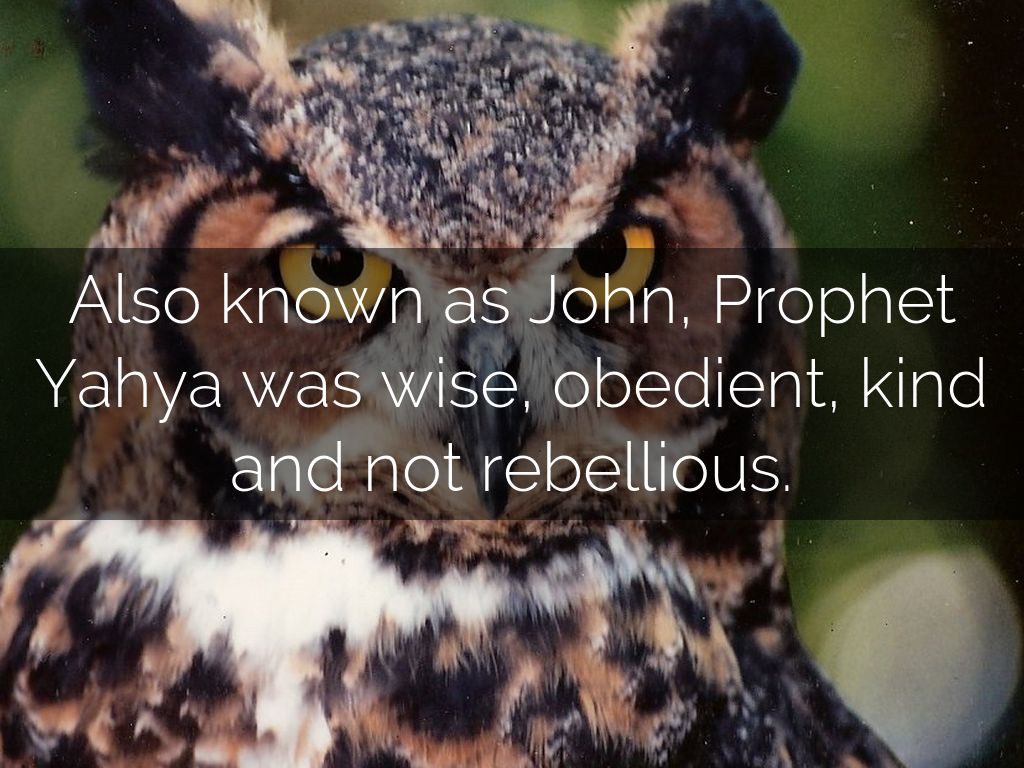 John loved reading since childhood. When he grew up, Allah the Exalted called upon him: “O John! Hold fast to the Scripture (The Torah).” And We gave him wisdom while yet a child. (Ch 19:12 Quran).

Allah guided him to read the Book of Jurisprudence closely; thus, he became the wisest and most knowledgeable man of that time. Therefore, Allah the Almighty endowed him with the faculties of passing judgments on people’s affairs, interpreting the secrets of religion, guiding people to the right path, and warning them against the wrong one.

John reached maturity. His compassion for his parents, as well as for all people and all creatures, increased greatly. He called people to repent their sins.

There are quite a number of traditions told about John. Ibn Asaker related that one time his parents were looking for him and found him at the Jordan River. When they met him, they wept sorely, seeing his great devotion to Allah, Great and Majestic.

Ibn Wahb said that, according to Malik, grass was the food of John Ibn Zakariyah, and he wept sorely in fear of Allah. A chain of narrators reported that Idris Al Khawlawi said: “Shall I not tell you he who had the best food? It is John Ibn Zakariyah, who joined the beasts at dinner, fearing to mix with men.”

Ibn Mubarak stated that Wahb Ibn Al-Ward narrated that Zakariayah did not see his son for three days. He found him weeping inside a grave which he had dug and in which he resided. “My son, I have been searching for you, and you are dwelling in this grave weeping!” “O father, did you not tell me that between Paradise and Hell is only a span, and it will not be crossed except by tears of weepers?” He said to him: “Weep then, my son.” Then they wept together.

They say John wept so much that tears marked his cheeks. He found comfort in the open and never cared about food. He ate leaves, herbs, and sometimes locusts. He slept anywhere in the mountains or in holes in the ground. He sometimes would find a lion or a bear as he entered a cave, but being deeply absorbed in praising Allah, he never heeded them. The beasts easily recognized John as the prophet who cared for all the creatures, so they would leave the cave, bowing their heads.

John sometimes fed those beasts, out of mercy, from his food and was satisfied with prayers as food for his soul. He would spend the night crying and praising Allah for His blessings.

When John called people to worship Allah, he made them cry out of love and submission, arresting their hearts with the truthfulness of his words.

A conflict took place between John and the authorities at that time. A tyrant king, Herod Antipas, the ruler of Palestine, was in love with Salome, his brother’s daughter. He was planning to marry his beautiful niece. The marriage was encouraged by her mother and by some of the learned men of Zion, either out of fear or to gain favor with the ruler.

On hearing the ruler’s plan, John pronounced that such a marriage would be incestuous. He would not approve it under any circumstance, as it was against the Law of the Torah.

John’s pronouncement spread like wildfire. Salome was angry, for it was her ambition to rule the kingdom with her uncle. She plotted to achieve her aim. Dressing attractively, she sang and danced before her uncle. Her arousing Herod’s lust. Embracing her, he offered to fulfill whatever she desired. At once she told hi: “I would love to have the head of John, because he has defiled your honor and mine throughout the land. If you grant me this wish, I shall be very happy and will offer myself to you.” Bewitched by her charm, he submitted to her monstrous request. John was executed and his head was brought to Salome. The cruel woman gloated with delight. But the death of Allah’s beloved prophet was avenged. Not only she, but all the children of Israel were severely punished by invading armies which destroyed their kingdom.